Local Action Group „Around the Łysa Góra mountain”
If you participate in study visit no. 1, you will get the opportunity to taste various traditional foods from the Świętokrzyskie region, which were suported by the LAG „Around the Łysa Góra mountain”.
In the Medieval Village created at the initiative of the LAG you will travel in time back to the Middle Ages to get acquainted with the beliefs and way of life of the people who used to inhabit the Świętokrzyskie mountains ages ago.

"Kowalczyk. Traditional sausage and cold cuts from Świętokrzyskie".
In 2013-2015 the company of Halina Kowalczyk implemented an investment projects for construction works and purchase equipment at her meat processing plant for pork and poultry. Sausages and cold cuts of the Kowalczyk company are prepared according to the old family recipes developed and tested over the years. The company offers smoked, cooked or baked meat products as well as seasonal product sets. The participants will be able to visit the production lines, taste the products and even purchase them on the spot.
Investment: PLN 700.000 (ca. EUR 150.000), RDP support PLN 100.000,00 (ca. EUR 22.000). Support was granted from RDP 2007-2013 within the measure „Micro-enterprise creation and development”. Two jobs were created by the project.


Juice production: "Taste of the Garden".
The company produces fruit and vegetable juices and also offers juice-pressing services. Juice is produced from pure products without adding any water, sugar or preservatives. The participants will visit the production lines and taste the products, and they will also be able to purchase them.
The company received funding from the LAG under RDP 2014-2020 and used it to purchase equipment which increased production capacity and broadened the product range. Thanks to its quality products, the company has been highly successful, for example:
- it is a member of the Culinary Heritage Trail of Świętokrzyskie
- it takes part in the Trail of Świętokrzyskie Forge of Taste
- it received a gold medal for apple chips during the 20th Agricultural Fair in Plauen
- it obtained first prize in the contest “Our Culinary Heritage – Regional Tastes”
- it was nominated to the award of “Pearl 2014” in the contest “Our Culinary Heritage – Regional Tastes”.
It also has been certified the promotional programme “Appreciate, it’s Polish”. The programme has the honorary patronage of the Minister of Agriculture and Rural Development, and the certificate was granted on the basis of evaluation by food experts.
Investment: PLN 530.000 (ca. EUR 115.000), LAG support: PLN 300.000 (ca. EUR 65.000). Two jobs were created.

"Świętokrzyskie Inn"
The Inn takes part in the Network of Świętokrzyskie Culinary Heritage and is one of the stops on the Culinary Trail Świętokrzyskie Forge of Taste. You can taste there delicacies of the region’s traditional cuisine such as zalewajka (soup), strawberry pancakes, juice from the Bieliny juice press, honey from the local apiary or locally produced sausages. However, you absolutely must taste one of their special soups: zarzucajka or zalewajka with fried egg.
Regional dishes are made from the produce of local farms or those from the wider Świętokrzyskie region. The unique architecture of the inn surrounded by striped fields and charming villages makes this place really worth visiting.
The inn takes part in the Network of Świętokrzyskie Culinary Heritage due to the special soups, baniocek pastry with pumpkin and pancakes with strawberries from Bieliny.
The inn cooperates with other members of the Network, purchasing from them raw material and helping them in direct sales. Some of the companies with which the Inn cooperates are: Zychowicz Meat Processing, Daleszyce,  Edyta Kot from the Taste of the Garden, Bieliny, Family Apiary „Napękowo Honey” and others.

Medieval Village in Huta Szklana
Visitors are carried back in time to the realities of the Middle Ages, where they can visit a household, a pottery, carpentry, saddlery and shoemaking workshop as well as the herbalist’s cottage. They will also get acquainted with the projects which helped in the making of the Village. Before EU accession, rural Świętokrzyskie was struggling with high unemployment. Therefore, one of the key challenges of the LAG was to use the tourist assets of Baćkowice municipality to create new jobs. Thanks to the joint work of the local authorities, the LAG and the inhabitants of Bieliny the idea was born to create a Medieval Village – new tourist attraction at the foot of the Święty Krzyż (Holy Cross) mountain.
The investment was carried out by the municipality of Bieliny and includes the Village, the Świętokrzyska Inn, as well as a shopping mall and parking spaces. The investment created 10 jobs in the Village and the Inn alone. Moreover, the shops opened the possibility for the local people to start new businesses of selling food and souvenirs. Before the Village was open the LAG carried out a number of preparatory projects for its staff, teaching them such skills as medieval crafts or speaking with the disappearing regional dialect
Investment: PLN 11.780.583 (ca. EUR 2.550.000), of which support from ERDF: PLN 10.746.393 (ca. EUR 2.336.000). 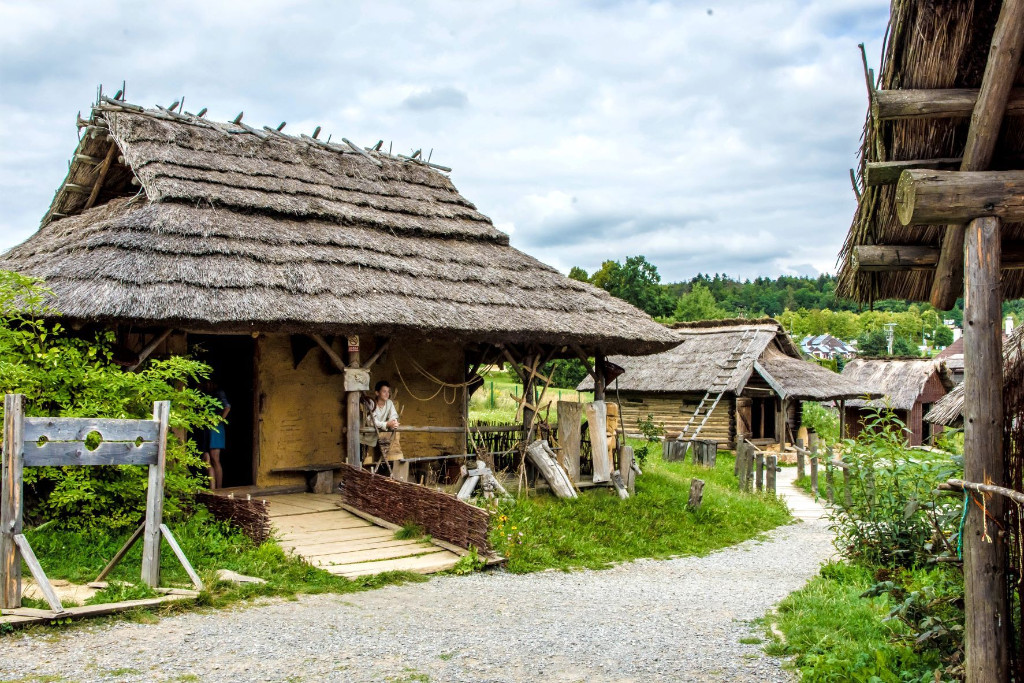